Skip to main content
Home » News » Female excellence is the rule, not the exception

Home » News » Female excellence is the rule, not the exception

Female excellence is the rule, not the exception

Female excellence is the rule, not the exception Speaking to a small group of local teenage girls, Yale’s Dr. Marjorie Rosenthal told them about her first feminist act. “In seventh grade, we all, boys and girls, had to take typing for the first time. Well, I said, ‘I’m not going to take typing because I’m not going to be anyone’s secretary,’” said Rosenthal. She laughed, “I thought it was a great feminist statement, but then when I became a doctor, I realized how useful it is to know how to type fast.”

Her audience, nine female students from New Haven high schools, laughed with her. Rosenthal was speaking to the inaugural class of the ForAGirl program — an intensive summer workshop for young women in STEM — about the personal and professional trajectories that led her to becoming a doctor, demystifying the process of entering medicine for her audience.

A new initiative of the Yale Center for Health & Learning Games, created by Dr. Lynn Fiellin, ForAGirl is open to young women who are participating in the Yale Pathways to Science program, the university’s long-running summer program aimed at encouraging middle and high school students from New Haven schools to pursue careers in the sciences. Within Pathways, young scholars select a more specific track; ForAGirl is the latest of these specialized pathways. Its focus is to promote the engagement of female high school students in the STEM (Science, Technology, Engineering, Math) fields as well as medicine and research, where even today, women are drastically underrepresented.

“‘You are really smart … for a girl …’ ‘You are really good at math … for a girl’” begins the introduction on ForAGirl’s website. “These statements highlight that sometimes girls and women are seen as being the ‘exception’ if they are smart or talented, while in fact they should be seen as the rule,” said Fiellin, director of the Yale Center for Health & Learning Games. 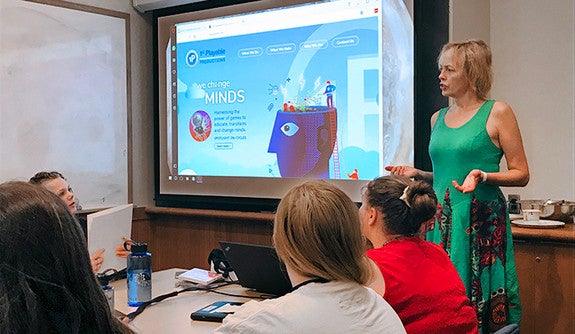 Tobi Saulnier, CEO of 1st Playable Productions, a video game developer, talks to ForAGirl participants about how and why she started the company. (Photo by Ziba Kashef)

“The goals of our ForAGirl Program,” Fiellin continued, “are to engage girls through mentorship and skill-building and through their exposure and interaction with extraordinary women faculty members and role models. By learning through our evidence-based research methods in our games research lab, they will recognize their solid position in pursuing education and careers in science, technology, medicine, and research. We hope to empower them to see that while different educational and career paths can have challenges, being a girl or a woman should not be an added challenge. They can accomplish anything they set their sights on.”

Founded in November 2015, the Yale Center for Health & Learning Games is an expansion of the work of Fiellin’s play2Prevent (p2P) lab, which she refers to as “our games research lab.” The p2P lab has been using videogame technology for health- and education-related interventions to promote positive social change since 2010, when the Yale School of Medicine received a grant from the Eunice Kennedy Shriver National Institute on Child Health and Human Development to fund the development of a game for HIV prevention.

Now, the Yale Center for Health & Learning Games and the p2P lab are applying game technology to inspire the next generation of women scientists. One of the primary objectives of ForAGirl is for students to work as teams to develop a videogame that addresses an issue that disproportionately affects women and girls. During the two-week program, the students will design a game and then pitch their idea to the rest of the class. Every morning, ForAGirl students attend general Pathways programs, but in the afternoon, they join Fiellin and her team for game development and presentations by guest speaker role models. Other faculty guest speakers presenting at ForAGirl this summer include: Kimberly Hieftje, Ph.D.; Marjorie Rosenthal, M.D., M.P.H.; E. Jennifer Edelman, M.D., M.H.S.; Cindy Crusto, Ph.D.; Seonaid Hay, M.D.; Sarwat Chaudhry, M.D.; Aileen Gariepy, M.D., M.P.H., FACOG; Marcella Nunez-Smith, M.D., M.H.S.; Jeanette Tetrault, M.D., FACP; and Lindsay Duncan, Ph.D.

For a girl, by a girl: Videogames to better the lives of women

On this second afternoon of the program, after Rosenthal’s presentation, the students broke out into their teams to continue planning their videogame projects. One group of three was mulling over the idea of a first-person virtual reality game where the user takes on the identity of a woman to experience a day in her life as affected by reproductive health rights and access. However, they thought the life of just one woman might be too specific and not representative enough; the group was aware that experiences women have with reproductive rights are incredibly dependent on which country they live in. The group decided that the player should be able to play through six different women’s lives — six women based in six different countries as diverse as Russia, China, the United States, and Nigeria, among others. One of the students remarked excitedly, “When boys play this, they’ll even have to experience the world as women.”

Before the afternoon session ended, the students heard from Tobi Saulnier, CEO of 1st Playable Productions, a videogame development studio. After telling the story of her career as an electrical engineer, Saulnier showed the girls several examples of games 1st Playable has created for both entertainment and educational purposes, including one that teaches users how to balance the federal budget.

Saulnier and her daughter, Kelsey Saulnier, a doctoral candidate in robotics at the University of Pennsylvania, then led a workshop for the students on making simple electromagnets from nails, batteries, and wire. In this way, the session included both mentorship and skill-building, said Fiellin.

“When I think about ForAGirl in the future, my vision is for the program to serve as resource for the larger New Haven community by providing access, opportunities, and support for those young women who are interested in STEM,” said Tyra Pendergrass, associate director for the Yale Center for Health & Learning Games. “The experiences and mentorship that the program is able to offer will help build a pipeline for young women in science, connecting those little ones first being exposed to science in primary school all the way up to those who have achieved professional degrees and are trailblazers in their fields.”

From the perspectives of the girls it’s trying to serve, ForAGirl is already living up to many aspects of this vision. One student said, “Programs like this, that get girls interested in science and STEM, are more important than ever. Girls can get discouraged when they don’t do well in a science or math class, but programs like this can help them persevere.”